GoodPet is often contacted to contribute to television, radio and print media. We are grateful to be able to share our knowledge and be a voice for all paws.

Or view the article as published online at the Independent Online website. 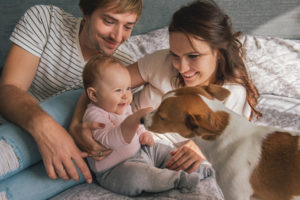 “Introducing your baby to the family pet”, as published in Living & Loving Magazine.

Introducing your baby to the family pet Following a number of recent dog attacks, Mari was approached to discuss this with the public and help bring awareness regarding, among other: the law, responsible ownership, and safety precautions.
The live broadcast was aired on Tuesday, 3 May, 2016 at 4:30pm
KZN has seen an alarming number of Pit Bull attacks Apologies! CII had lost some of their podcasts and the one of Mari’s show was never retrieved. The only recording we have is a home recording by Adéle J Kruger.

Thank you, Adéle for uploading it to Soundcloud so that we can share it here!

Read about pet-related topics with GoodPet

North Coast Courier – Dog attacks: who is to blame?

Pooches and parties: some tips for…

IOL: Pooches and parties – some tips for parents

Go to contributions via our Facebook Newspaper Articles Photo Album

Print Media contributions are included in: